Congratulation to Tony Edwards on winning the 2017 IOM Veterans Championships @ West Cornwall RSC over the weekend. 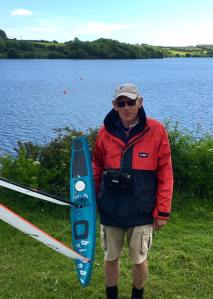 After day one with a couple of rig changes, no general recalls or protests both skippers and the race team retired to Falmouth for refreshments and a well earned rest.

Day two dawned with damp conditions, luckily subsiding prior to the first race, leaving a light shifty westerly breeze that kept skippers and the race team on their toes and undoubtedly led to a few general recalls and more than a few course changes and a few skippers found bouncing between fleets and getting there moneys worth!

In all a great weekends sailing with a friendly atmosphere throughout the fleet.

Full results can be found here

A video taken by ARO Simon Clarke can be found here.