43 skippers met at Manor Park for the 5th and 6th ranking races of 2019, a final practice weekend for the GBR skippers travelling to Brazil for next months World Championships.

A few new designs were on show, Derek Priestley sailing the new Dave Hollom design ‘Dead Reckoning’ built by David Winder, Martin Roberts sailing an ‘A2’ from P+J Design in Spain and Craig Richards sailing his own designed and built ‘Vanilla’ which was immaculately turned out. Graham Bantock also chose to to sail a BritPOP! to check his rigs out before the Worlds.

After the welcome and skippers brief by our PRO for the weekend, Colin Walton, the seeding races commenced at 10am in a light SW wind with some very challenging shifts to contend with. The 3 seeding races were won by Tony Edwards, Nick Martin and Chris Harris but it was Rob Walsh who set the early pace, winning races 2 and 3.

The following 6 races were won by 6 different skippers, Vernon Appleton, Steve Taylor, Craig Richards, Graham Bantock and Peter Stollery managing to drift across the line with seconds to spare for the final race to count before the 5.30 pm cut off.

The 2 skippers that showed most consistency and skill battled until the final race with the lead changing throughout the day but it was Rob Walsh who just pipped Tony Edwards at the end of the day with Peter Stollery coming in 3rd.

After sailing, the boats were packed away and all skippers and volunteers were invited into the clubhouse for a culinary treat prepared by Tracey, Emily and Penelope Ballington and also Susan Walton, this was then followed by the prize giving and then finally pudding. 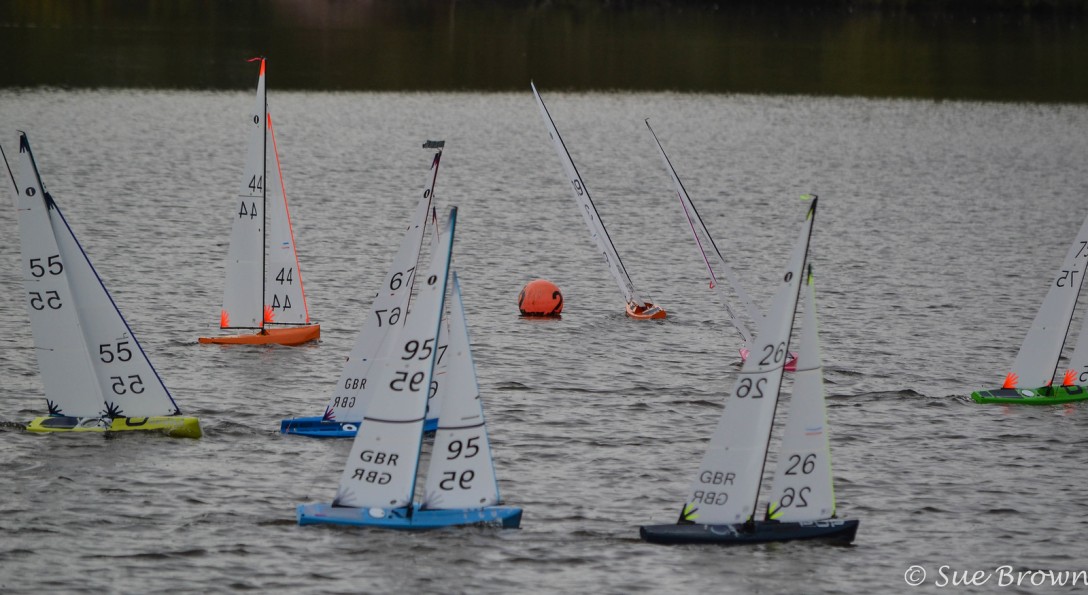 The rain came down for the 6th and final ranking race of 2019 but it did not dampen the spirits of the 43 skippers.

Another light top suit wind from the SE for the 3 seeding races which were won by Gavin Watson, Graham Elliott and Rob Walsh.

The wind then started shifting more from the West and reducing in strength but it was Chris Harris who showed his skill to win race 2. The wind then started shifting again and unfortunately reducing, that much so that race 3B had to be postponed due to the lack of wind, fortunately the rain had now stopped now. An enforced break of nearly 2 hours was taken before the wind filled in from the West. 2 more races were completed with Peter Stollery showing a clean pair of heals in both and in doing so won the day with Rob Walsh in 2nd and Nick Martin in 3rd.

Many thanks must go to Min, Nancy and Roy for finishing all weekend, to Penelope and Darin for there tireless work in the boat and other duties, to Paul Stubbs and Gordon Sears for scoring, to Rachael for her observer duties, also to Laurie Brown and Garry Box for their general help.

Manor Park had also recruited the use of international judge, John Burgoine, who had a very quiet weekend due to the good sportsmanship of all skippers.

Good luck to all GBR skippers at next months World Championships in Brazil.